Our program is currently working on a new project that evaluates the survivability of resistant or tolerant cultivars of herbaceous perennial and annual ornamental plants to multiple species of Phytophthora in the landscape.

Phytophthora is a soil-inhabiting organism that affects a broad range of plant hosts including fruits, vegetables, and ornamentals across the world. Depending on the host, Phytophthora species can cause root rot, crown rot, and/or stem and leaf lesions. The pathogen is favored by warm temperatures (75-90 degrees F) and excessive moisture, and can be particularly devastating and difficult to control once established. The spores are spread via splashing rain, excessive irrigation, runoff water, poor soil drainage, or by contaminated soil and equipment. 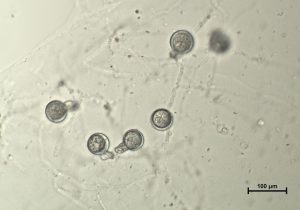 Our study aims to provide a sustainable approach to landscapers by evaluating multiple cultivars of annuals and herbaceous perennials that are tolerant or resistant to Phytophthora. Plants were selected based on desirability and prior observations of tolerance or resistance to Phytophthora and other common diseases found in ornamental plants (ex. downy mildew). Click here to view the cultivars we are evaluating in this study.

Three landscape beds were established to ensure consistency within the confines of one growing season. Each bed is established in:

Each bed is approximately 200ft2 and filled with a blend of screened top soil and compost. To infest the soil, inoculum of three species of Phytophthora (P. nicotianae, P. drechsleri, P. tropicalis) known to cause disease on herbaceous ornamentals will be added to each bed. Plants will be rated regularly for disease incidence and severity based on the percentage of the plant showing symptoms of root rot, crown rot, or aerial blight.

The best management strategy to date is pathogen avoidance. Along with good sanitation, proper water management is the most important factor in reducing the threat of disease. This includes reducing soil saturation, preventing splash dispersal, and ensuring proper soil drainage. Phytophthora species can survive several to many years in soil; therefore it is best to remove diseased plants, avoid prolonged water saturation, and to replace with a resistant or tolerant species (those that can maintain vigor while infected). Chemical control is not recommended for the homeowner as it involves multiple fungicidal applications that are costly and only suppresses the pathogen.

This research was supported by a grant from the Horticultural Research Institute (HRI). Its contents are solely the responsibility of the authors and do not necessarily represent the views of HRI.